Scary movies are great because of the bad guy. Horror movie villains are what keep us coming back, and a few of them have become horror icons. They have become a part of horror history and recognizable to any fan of this genre.

I narrowed the list down to these 5 horror icons:

These might not be your Top 5, but that doesn’t mean you can’t vote for your favorite.

Horror fans are a unique bunch of people. We all have our own reasons for loving the horror genre. There are no guidelines for voting. You can vote for the killer who’s most evil, most famous or just your favorite. Maybe human killers fill you with dread more than supernatural ones.

We all know Micheal is pure evil, but Jason has a higher bodycount. Does the fact that Leatherface did all his killing as a human, without any supernatural powers count for anything? You decide!

Here are the horror movie characters listed in alphabetical order. Voting is lower on the page, right above the Jason Voorhees bio.

The serial killer Charles Lee Ray was cornered and shot by police. He used his voodoo sorcery skills to transfer his evil soul into a nearby Good Guy Doll in order to survive the encounter. Chucky spends a lot of his time killing humans and trying to get back into a human host. 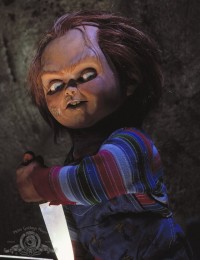 Weakness: Shooting Chucky in the heart after his heart has become a human heart will kill him.

Personality:
Chucky has the psychopathic and sadistic personality you would expect from an accomplished serial killer. He is all ego with a streak of narcissism and doesn’t show any remorse or guilt. In fact, Chucky clearly takes pleasure in hunting and torturing humans.

Inspired By: Chucky in the form of The Good Guy Doll was inspired by the real life My Buddy Dolls.

• Chucky is doll-sized with the strength of a full grown man.

• He likes to frame human survivors for murders he committed.

• Chucky holds a grudge when he feels wronged, and will get revenge.

Aka: The Springwood Slasher

While alive Freddy was a child killer in Springwood, Ohio. He was arrested for his crimes and eventually released due to a technicality. The angered parents in town chased Freddy down and burned him to death in his boiler room. A place Freddy often took his victims. After dying Freddy gained the power to invade people’s dreams. 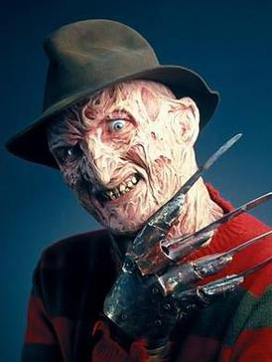 Strengths:
Has infinite powers in your dreams, but loses them all in the real world. In your dreams he has the power of fantasy and imagination. Likes to impersonate other people.

Weapon of Choice: Glove with knives for fingers.

Weakness: Becomes more vulnerable in the real world. Can also be forgotten for periods of dreamlessness.

Personality:
Freddy is violent and cruel, but he has brains along with brawn. He and Chucky have a similar sense of humor and often make hokey jokes before killing.

Inspired By:
The character Freddy Krueger was inspired by a memory from Wes Craven’s childhood. Around age 10, Wes Craven looked out his bedroom window and saw a homeless looking man in a striped sweater. The man looked directly at Wes and continued to stare at him. The creepy guy left a lasting bad impression on that 10 year old boy; but did the rest of us a favor.

• Unique from other horror icons like Jason, Michael and Leatherface, only one actor has played Freddy. The famous Robert Englund!

• Has a song written about him.

• Kills you in your sleep. Eventually you will fall asleep.

Jason drowned at camp when he was 11 years old, and his body was never recovered. His mother, Pamela, told the counselors to watch him because Jason wasn’t a good swimmer. The counselors didn’t watch Jason and were having sex while he drowned.

His mother took revenge by killing counselors but was ultimately unsuccessful and Jason saw his mom get decapitated. Since then Jason has been stalking camp counselors and killing anyone who gets in his way. 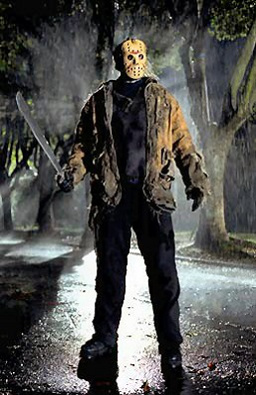 Weakness: Can be tricked by impersonating his mother.

Hobbies: Loves camping and hanging out with his mom.

Nemesis: Nobody lives long enough to be a serious adversary.

Inspired By:
Jason Voorhees isn’t based on anyone. He was never supposed to become one of our biggest horror icons. According to writer Victor Miller “Jason was [deceased] from the very beginning; he was a victim, not a villain.” They only wanted Jason to be a body in the lake, but he actually stole the show.

Personality:
Jason Voorhees is the kind of horror movie villain that you would call the strong and silent type. He can talk, but doesn’t do it often. He may be slow moving, but he makes up for it with persistence and drive.

Jason didn’t acquire his beloved hockey mask until the third film. He wore a sack in the second movie and only appeared as the memory of a child in the first. The mask was a huge improvement and increased his intimidation factor.

• He stars in Friday the 13th video games. The most memorable is the NES game.

• Unlike the other killers on this list, Jason Voorhees began entirely as a victim, not a criminal.

Aka: Jedidiah Sawyer, Jed, Bubba, Junior, Leather, Thomas Hewitt… It depends on which horror film and which timeline you’re on.

Leatherface is a mentally challenged killer who likely has a very low IQ. Unlike the other horror icons on this list, Leatherface lives at home and has many social interactions with family members throughout the day.

In fact, he has been negatively influenced by multiple psychotic family members and will often follow their commands, no matter how cruel. Watching Texas Chainsaw Massacre horror films is like entering a house of horrors and getting caught up in a torturously dysfunctional family meal.

Leatherface has an imposing physical presence, which is even more terrifying when he wields a chainsaw. 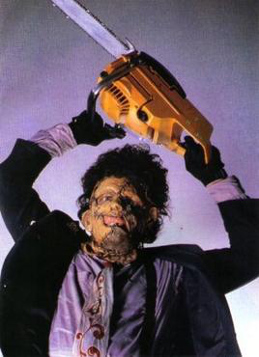 Weakness: He is mortal and vulnerable to all human weaknesses. Low IQ makes him easy to trick.

Nemesis: Outsiders who come to his home.

Personality:
Leatherface has a childlike personality, probably due to his low IQ or mental issues. He doesn’t form words well but does make a lot of grunting and moaning sounds. Leatherface creates masks for himself using the skin of his victims and likes to wear them.

He can be volatile and gets easily frustrated. When struggling to catch his victim he may stop and throw a tantrum. Leatherface doesn’t have the persistence you see in horror icons like Micheal Myers and Jason Voorhees and lacks the cleverness of Freddy Krueger and Chucky.

However, Leatherface does have the support of his family and he usually kills in order to protect his home and family from outsiders.

• Only horror icon on this list that is mortal.

• Leatherface and his family are cannibals.

• Kills when afraid or startled.

Aka:  The Shape, The Boogeyman

Micheal Myers may be one of the most well known horror movie characters. His story began on Halloween night in Haddonfield, Illinois when he was only six years old. Michael walked upstairs and stabbed his older sister to death with a kitchen knife.

The boy was sent to a sanitarium and then escaped fifteen years later only to return home on a killing spree. Micheal Myers has a one track mind and doesn’t stop until he finds his prey.

Hobbies: Paper mache and a big fan of Halloween.

Inspired By:
The character of Micheal Myers was inspired by a class trip John Carpenter took while in college. He visited a mental institution in Kentucky, with the most serious mentally ill patients and Carpenter saw a boy about 12 – 13 years old.

The boy’s schizophrenic stare was “a real evil stare” and Carpenter found it unsettling, creepy and insane. (Wikipedia)

“I met this 6-year-old child, with this blank, pale, emotionless face and the blackest eyes, the devil’s eyes. I spent eight years trying to reach him, and then another seven trying to keep him locked up because I realized what was living behind that boy’s eyes was purely and simply…evil.”
– Donald Pleasance, Halloween

Overall, Micheal Myers doesn’t have much of a personality underneath that mask. He is pure evil.

• Does his killing on or around Halloween night.

• Can have long periods of inactivity.