Finding Halloween party songs is more convenient than ever with Spotify, Pandora, Itunes and all the available technology. However, putting three or four songs on repeat as a Halloween playlist can turn your party guests into a bunch of zombies. Looking up songs ahead of time and creating an extensive Halloween music playlist can keep things fun and give guests something to talk about.

We have put together a list of music to keep guests in the spooktacular spirit of Halloween all night long. This is not generated by an algorithm using a bunch of terms like black, cat, witch, devil, etc. so you won’t find all the unrelated music that many other lists have. 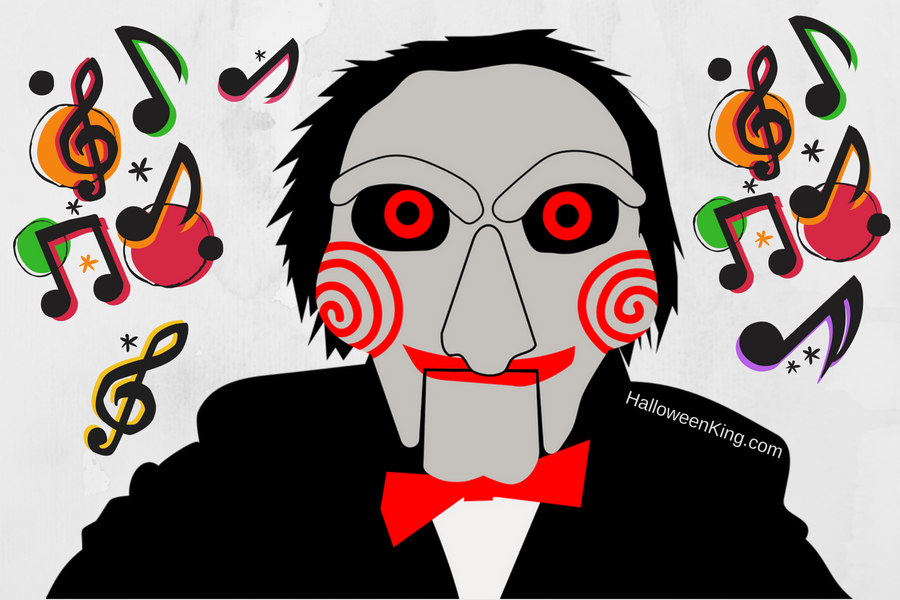 All of the movie theme songs on this Halloween movie playlist are available below if you want to hear a sample clip.

• “Halloween” : Theme John Carpenter – The original Halloween theme song is iconic. It’s creepy sound is a great way to scare people in any dark area of your party. Check out The Fog theme for another fun John Carpenter song.

• “Welcome to Crystal Lake” : Harry Manfredini – Friday the 13th has an iconic creepy sound that just might scare your guests to death.

• “Trouble in Woodsboro” : Marco Beltrami – This is from the Scream soundtrack and is a great addition to any Halloween music playlist.

• “A Nightmare on Elm Street” : Charles Bernstein – It’s Freddy Krueger…that’s all I have to say about it.

• “This is Halloween” : Citizens of Halloween – You can’t go wrong with this fun song from The Nightmare Before Christmas.

• “Theme From Gremlins” – The Gremlins has a memorable upbeat but spooky sound that will complement any Halloween music playlist.

• “Killer Klowns From Outer Space” : The Dickies – This classic horror movie music can be a great soundtrack for anyone throwing a killer clown theme party.

• “Tubular Bells” – This is the theme song for The Exorcist, which tells you everything you need to know.

• “The Insidious Plane” : Joseph Bishara – Play this one along with “Tiptoe Through The Tulips” to really creep out your guests.

• “Tiptoe Through The Tulips” : Tiny Tim – This one is for fans of Insidious. Add it to your Halloween playlist and your guests will recognize it immediately.

• “The Fog Theme” : John Carpenter – This one sounds eerily similar to the theme song for Halloween which isn’t surprising because they are both done by John Carpenter. If you like Halloween, check out this song.

This Halloween music playlist is filled with movie theme songs to celebrate the holiday season. These are the songs listed above in the same order, with the option to hear music clips from each song.

These are classic songs you can put on any Halloween playlist. Over the years they have come to symbolize a part of Halloween for one reason or another. If you are throwing a classic Halloween party and want to include all the traditional music, consider adding these. Many of these Halloween party songs will be played at get togethers all across America this holiday season.

• “Thriller” by Michael Jackson – This song is a must if you are making a classic Halloween music playlist this Halloween. It’s one of the most popular Halloween songs of all time.

• “Ghostbusters” by Ray Parker Jr – This is another very popular song around the Halloween season. If you want a more modern version check out the third song on our Contemporary Playlist below.

• “Monster Mash” by Bobby ‘Boris’ Pickett & the Crypt-Kickers -This is a popular song for every Halloween playlist and it’s both kid and adult friendly.

• “She Blinded Me with Science” by Thomas Dolby

• “Werewolves of London” by Warren Zevon

• “Somebody’s Watching Me” by Rockwell – This is one of the great classic Halloween party songs and makes reference to the Psycho movie!

• “The Devil Went Down To Georgia” by The Charlie Daniels Band – You won’t find this on every Halloween music playlist, but it’s a fantastic song with a man battling the devil for his soul.

• “Sympathy For The Devil” by The Rolling Stones

• “Every Breath You Take” by The Police – This sinister song about a stalker has been mistaken as a love song by many. However, if you listen to the words it’s clear how creepy the song really is.

• “Magic Dance” by David Bowie – This song will sound bizarre if you haven’t seen Labyrinth. For fans all I have to say is Goblin King! 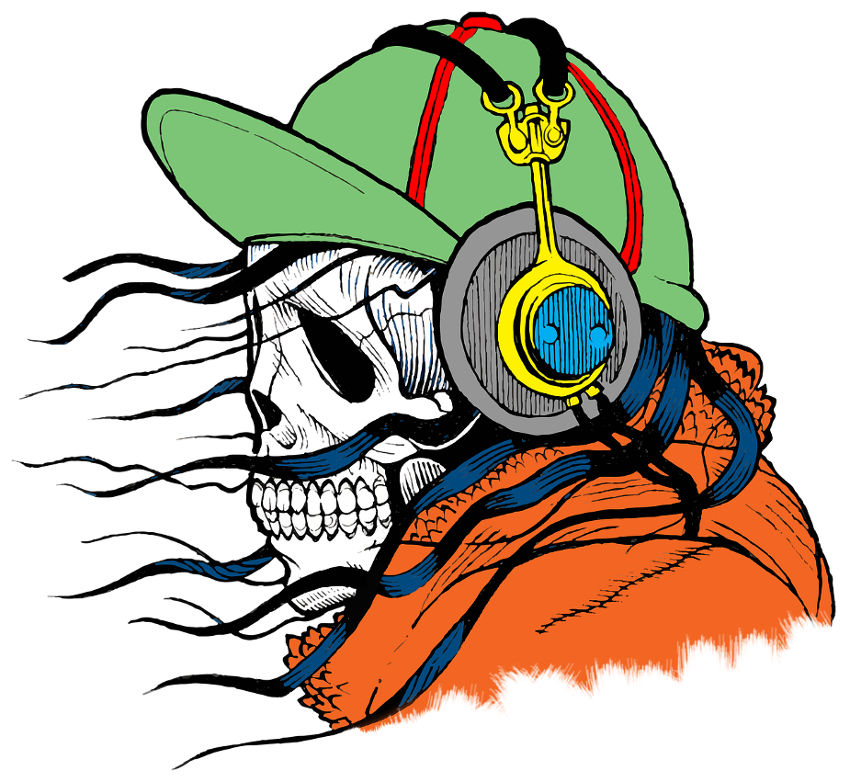 This playlist has more contemporary and modern Halloween party songs to entertain your guests. Are you tired of hearing the same songs at every party? If you want to switch up your party by adding a more modern sound, these songs can get you started.

A great party soundtrack can include a mix of contemporary Halloween music with a few of the classics thrown in. If you are interested in a dance heavy soundtrack, many of the classic songs can also be found in dubstep and other mixed versions.

• “Zombie” by Natalie Kills – This song is a great addition to any Halloween music playlist because it’s a good song about love with a heavy zombie theme.

• “Ghostbuster (I’m Not Afraid)” by Fall Out Boy with Missy Elliot – Let’s face it, everyone will be playing the original version at their party. Consider adding this updated version of “Ghostbusters” to your Halloween playlist this year.

• “Can’t Feel My Face” by The Weeknd – This does’t have your typical Halloween sound, but the whole I can’t feel my face thing can pass as creepy if you want to include it.

• “I’m in Love with a Monster” by Fifth Harmony – This is an upbeat dance song that was used in Hotel Transylvania 2.

• “Tiptoe Through the Tulips” by Tiny Tim – This one is great for any Halloween music playlist because it will catch your guests by surprise. Fans of the Insidious franchise will recognize this spooky song immediately.

• “Excorcist theme” Dubstep version – This is just one example of a dubstep version of a horror movie theme song available. If you enjoy this kind of music you can make an entire Halloween playlist with dubstep Halloween classics. 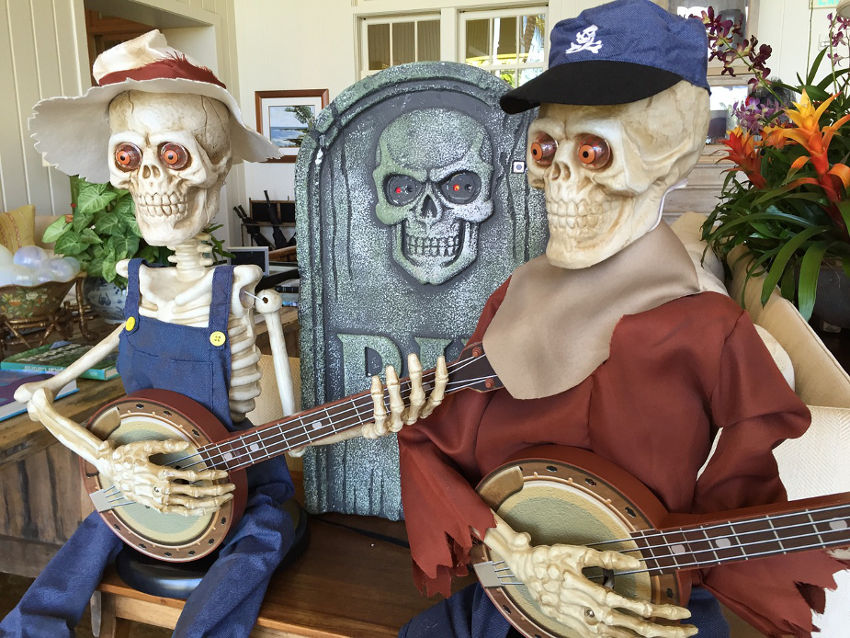 These songs may not be classic or contemporary, but they are still great additions to your Halloween music playlist. Included below is a diverse list of Halloween party songs to make a soundtrack for your party. You can find songs from the usual genres along with dance, pop, hip hop, rock, punk, rap, and even a touch of disco. These are great songs to sprinkle throughout your playlist or even to use with a theme party. With songs like “Halloweenhead” and “Spiderwebs in my Hair” there is a lot of holiday spirit to be found spread through this Halloween playlist.

• “Walking with a Ghost” by Tegan and Sara

• “Halloween” by Siouxsie and the Banshees – Song used for the end credits of Monster House and a good song for any Halloween playlist.

• “Black Widow” by Iggy Azalea and Rita Ora – Ok, this one barely made the list. It’s included for anyone doing a Spider Swarm theme who may be having a hard time coming up with Halloween party songs.

• “Halloweenhead” by Ryan Adams – Honestly, I don’t know why this isn’t on every Halloween playlist. It could be the anthem for Halloween.

• “Freaks Come Out at Night” by Whodini

• “Secret” by The Pierces

• “Zombie” by The Cranberries

• “Yes, I’m a Witch” by Yoko Ono – Yes, that’s right Yoko Ono has made our list of Halloween party songs this year.

• “Tarantula” by Pendulum – This song won’t be for everyone, but it has an interesting sound with a reggae vibe to it.

• “Bring Me To Life” by Evanescence

• “Every Halloween” by Insane Clown Posse

• “Lotion” by Greenskeepers – Remember Buffalo Bill from Silence of the Lambs? Imagine a catchy little tune sung from his perspective and you have this song. A perfect addition to the Halloween music playlist of Hannibal Lecter fans.

• “Men in Black” by Will Smith

• “Double Trouble” by John Williams – You might recognize this one from Harry Potter and the Prisoner of Azkaban.

• “Halloween” by AFI – It’s actually a cover of the misfits song “Halloween” so you can choose whichever one you prefer. (Misfits fans, you can bite my head off for picking AFI’s version on our Facebook page.)

• “Howlin’ For You” by The Black Keys

• “Running With The Devil” by Van Halen

• “Dracula” by Gorillaz – This is a fun Halloween party song that you won’t hear at many parties. It has the Gorillaz upbeat sounds and catchy tunes that fans are used to.

• “Season of the Witch” by Donovan – This is another Halloween classic, but it wasn’t popular enough to make the classics list.

• “Dead and Gone” by T.I. and Justin Timberlake

• “Evil Eye” by Franz Ferdinand – This is a fun song for your Halloween music playlist but I don’t recommend checking out the video unless you like weird stuff.

• “Surfin’ Dead” by The Cramps – Used in the soundtrack of Return of the Living Dead, this is actually a fun upbeat zombie song.

• “Supernature” by Cerrone – This disco song from the 1970’s was surprising ahead of its time.

• “Red Right Hand” by Nick Cave and the Bad Seeds – Along with being a creepy song in its own right, this was also featured in the first three Scream movies.

• “People Are Strange” by the Doors

• “Spiderwebs in My Hair” by Clark Ford – A fun and upbeat retro Halloween song. This is a good addition to any adult or children’s Halloween music playlist.

• “Dead Pumpkins” by Insane Clown Posse – The name says it all. This song is all about Halloween and if you are a fan of ICP you will appreciate it. Beware, like most ICP songs it’s marked explicit.

• “Gingerbread Coffin” by Rasputina – If you haven’t heard of Rasputina, they are worth checking out. You may find a couple unique Halloween party songs in their line up. Rasputina has a way of making the violin, cello and other instruments sound like weeping and moaning, which makes for creepy music.

Check out these Halloween topics too:

→ Halloween Games for a Kids Party

→ 7 Halloween Colors and their Meaning