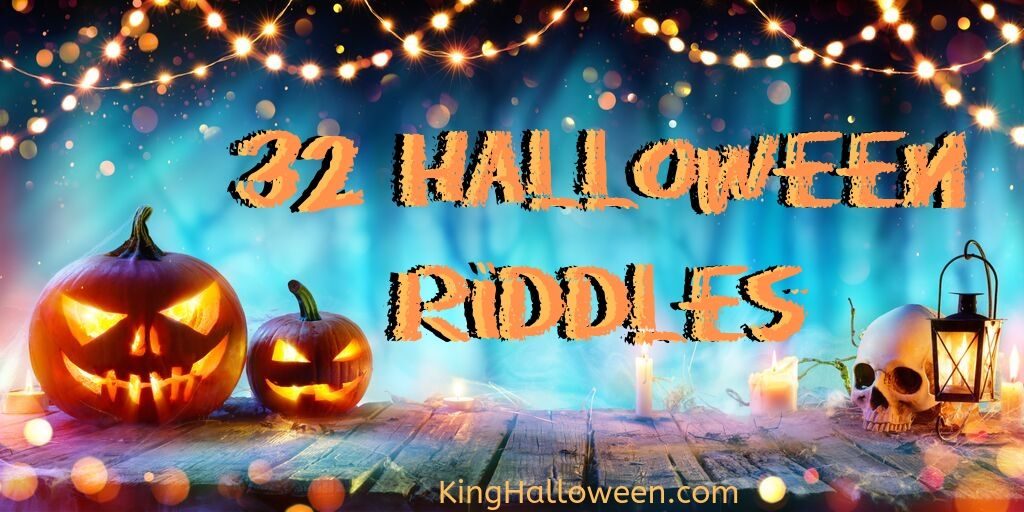 Ready for some mind-bending Halloween riddles? We’ve put together an immense collection of Halloween themed topics, spooky riddles and answers for your entertainment. Read these creepy stories and brain teasers and see if you have the ingenuity to deduce the solutions. Check out our other page with scary riddles if you want more creepy questions to get you in the Halloween spirit.

These are short and simple Halloween riddles to get you warmed up and in the right mindset for riddling. If you prefer a short and sweet Halloween quip, check out our many Halloween joke pages. 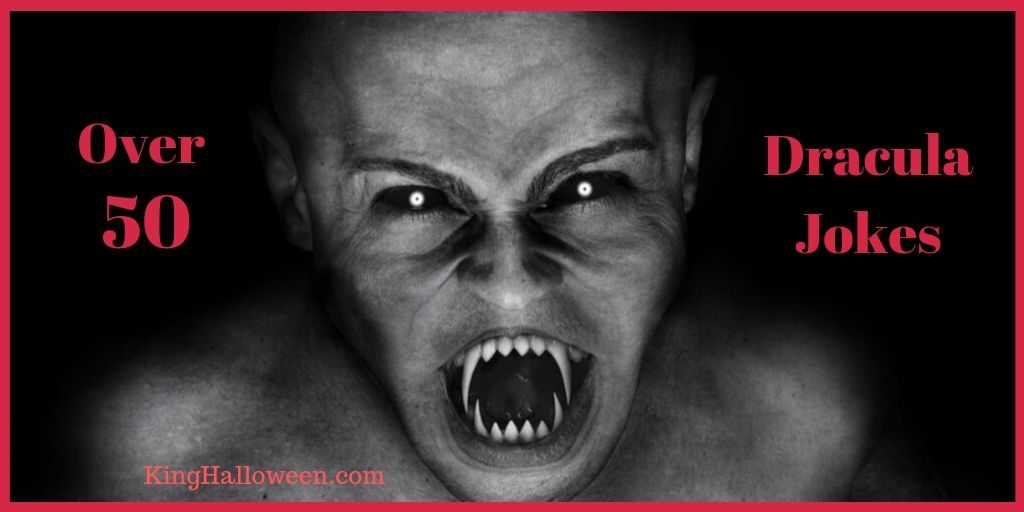 Answer: A Joke. Check out our Vampire joke page here!

What Am I Halloween Riddles

This classic style of riddle describes an object, person or place and then asks you the question “what am I?” It sounds straight forward but these Halloween riddles will get tricky and may use wordplay to throw you off.

What Am I Riddle Answers

These Halloween riddles are pretty scary, but not half as scary as our Evil Clown List!

Police can’t find a body, but they believe a widow was killed on the floor of her garage on Halloween. Police see what looks like a bullet hole in the garage floor.

They don’t know it yet, but her husband’s dead body is in the wall of the garage. Why do police think this was racially motivated? 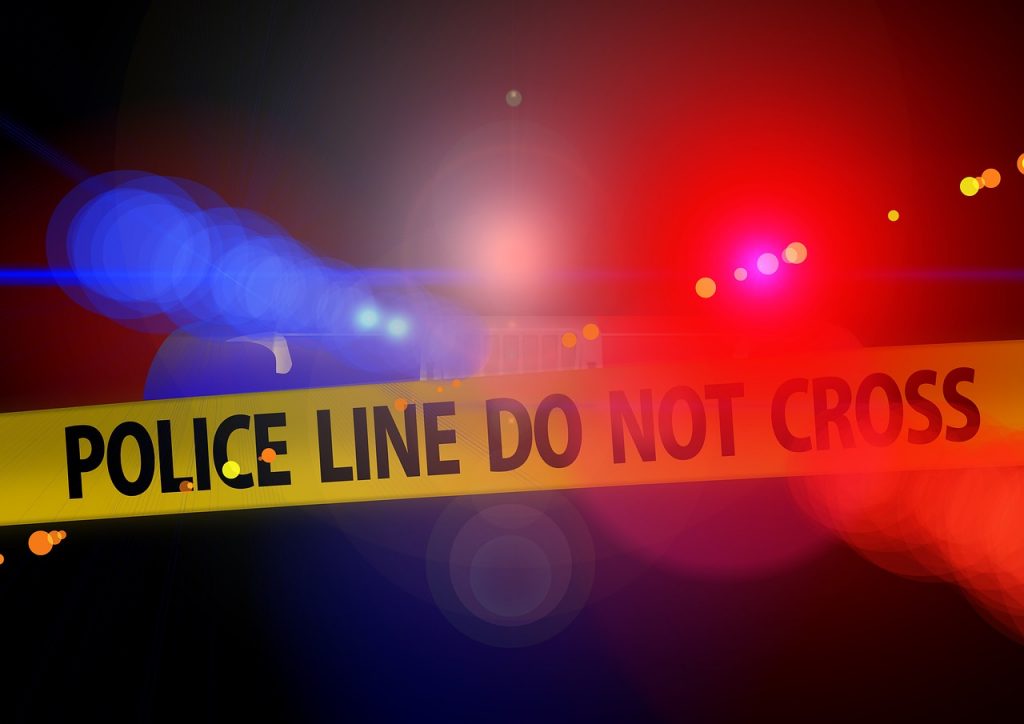 Answer: Police were called to the scene because a neighbor heard gunshots. When they arrived, a woman stated that she killed a poisonous spider in the garage using her gun.

The spider’s body was obliterated by the bullet. She told police she had to kill it because it was a Black Widow spider. This is why it’s racially motivated.

On Halloween day, I was watching the news and saw the house I used to live in as a child on the screen. It was a breaking news story. They reported the body of a girl was found buried in the back yard. I was shocked!

I grabbed my phone and called my dad immediately to tell him about it.

“Dad, have you seen the news?” I asked.
“No,” he replied. “Why?”
“You’ll never guess what happened,” I gushed breathlessly. “Remember our old house where I grew up? Well, it’s on the news. They found a dead body buried in the backyard. The police are questioning the homeowners now.”

“What?” he replied. “Are you serious? Wow, that’s scary!”
“Yeah, it’s scary,” I said. “What if the body was there back when we were living in the house. We could have been walking back and forth in the garden, all the time not knowing there was a corpse beneath our feet. It freaks me out just to think about it.”

“Me too,” he said. “There was never anything suspicious while we were living there, but it’s a scary thought. Of course, I feel bad for the parents.”
“Yeah, me too. They must have been devastated.”
“I wonder who buried her there?” he said. “It’s sad all around. I’m not going to mention it to your mother. She gets upset so easily.”

“Good idea.” I said. “Well the police are investigating it now, they’ll probably get to the bottom of it.”
“I hope so,” said my dad.

Who is the killer? 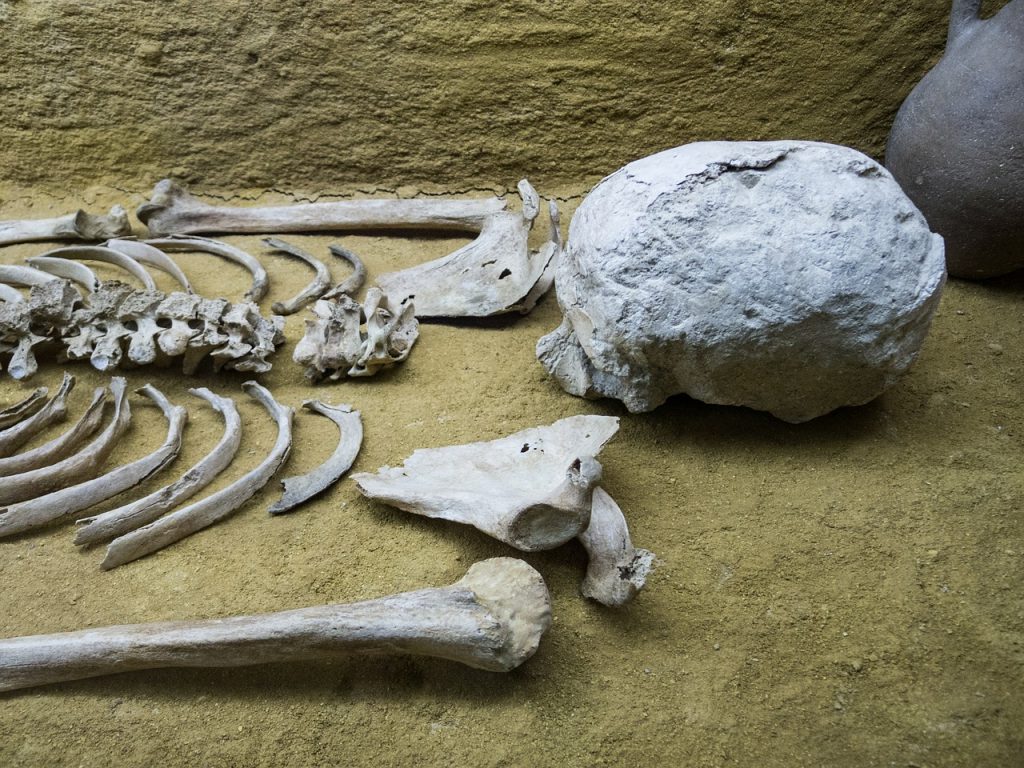 Answer: The father killed and buried the child while he was living there. He said I wonder who buried her there, but nobody told him the corpse was a girl.

Riddles With A Twist

Here are a few Halloween riddles that will make you think.  The answers are written below so you can take extra time to really think about what the answer might be. Riddles are puzzles to be solved often using double meanings and the rest of the riddles listed will need extra thought.

Don’t read these terrifying tales alone at night. These scary riddles are a bit longer and a bit creepier than most. Only the bravest souls should continue on and solve these scary Halloween riddles, or bring a friend.

On a dark stormy Halloween night four kids were bored because of a blackout, so they decided to go checkout the neighborhood haunted house.

Mike, Tom, Vanessa and Sue enter the haunted house, but only one will leave alive!

The kids go inside, take stairs to the second floor, find a hidden door, walk up a secret staircase and eventually end up in a narrow hallway. As they walk through a spooky hallway, a trapdoor opens up in the floor beneath them.

They all fall 25 feet down a laundry chute landing on a mattress in a dank concrete cellar.

There are four open doors and no other ways to escape. The kids see a different fate waiting through each doorway. There is a bottomless pit, a pool filled with acid, a bottle marked with a skull and crossbones and an electric chair.

Written on the wall in blood are the words “One will survive. Choose! The Exit Will Appear.” Mike goes to the door with the bottomless pit , Tom goes towards the pool of acid, Vanessa grabs the poison and Sue sits in the electric chair. Who will survive? 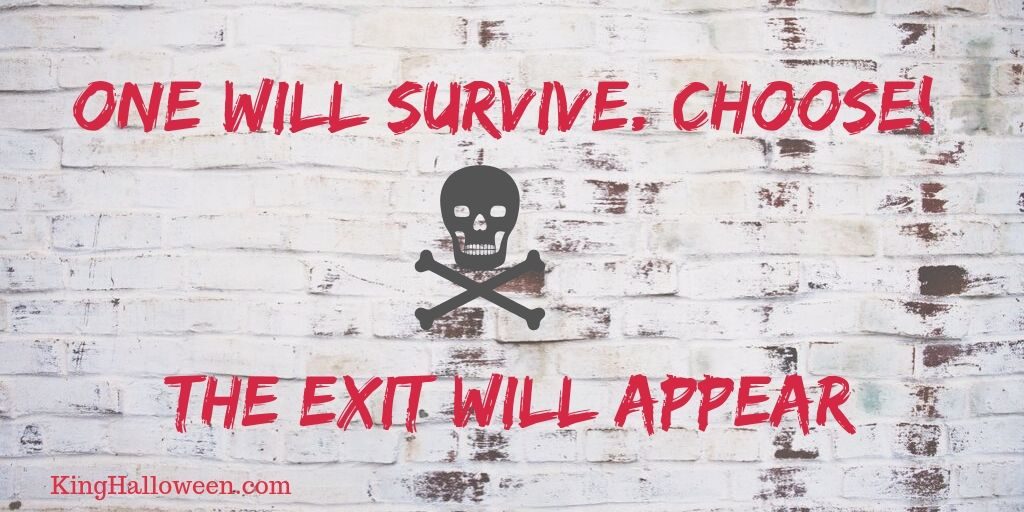 Answer: Sue because there’s no electricity during a blackout.

My older brother went completely crazy a few years ago on Halloween night. He was dressed as Vanilla Ice when he stabbed and killed my sister. Then he attacked both my parents.

The police were able to subdue my brother before he killed them too. Ever since the incident he’s been in a mental hospital and we never visit him or talk about what happened.

This morning, we got a letter from him in the mail, it was postmarked yesterday. I opened it and inside there was a strange note:

“Tonight you all are in my sights.
I know only darkness, never light.
Will you care if I break?
Escape I can’t from past mistakes.

See this sadness, overwhelming at times.
You have every right to not forgive my crimes.
Soon I hope to cross your minds”

The note was gibberish, obviously my brother was still a total lunatic. I couldn’t make sense of it, so I went to the kitchen and gave it to my mom.

She read through it and her face went pale, the note slipped from her fingers. She ran towards the front door, stopped halfway there and started screaming. What happened? 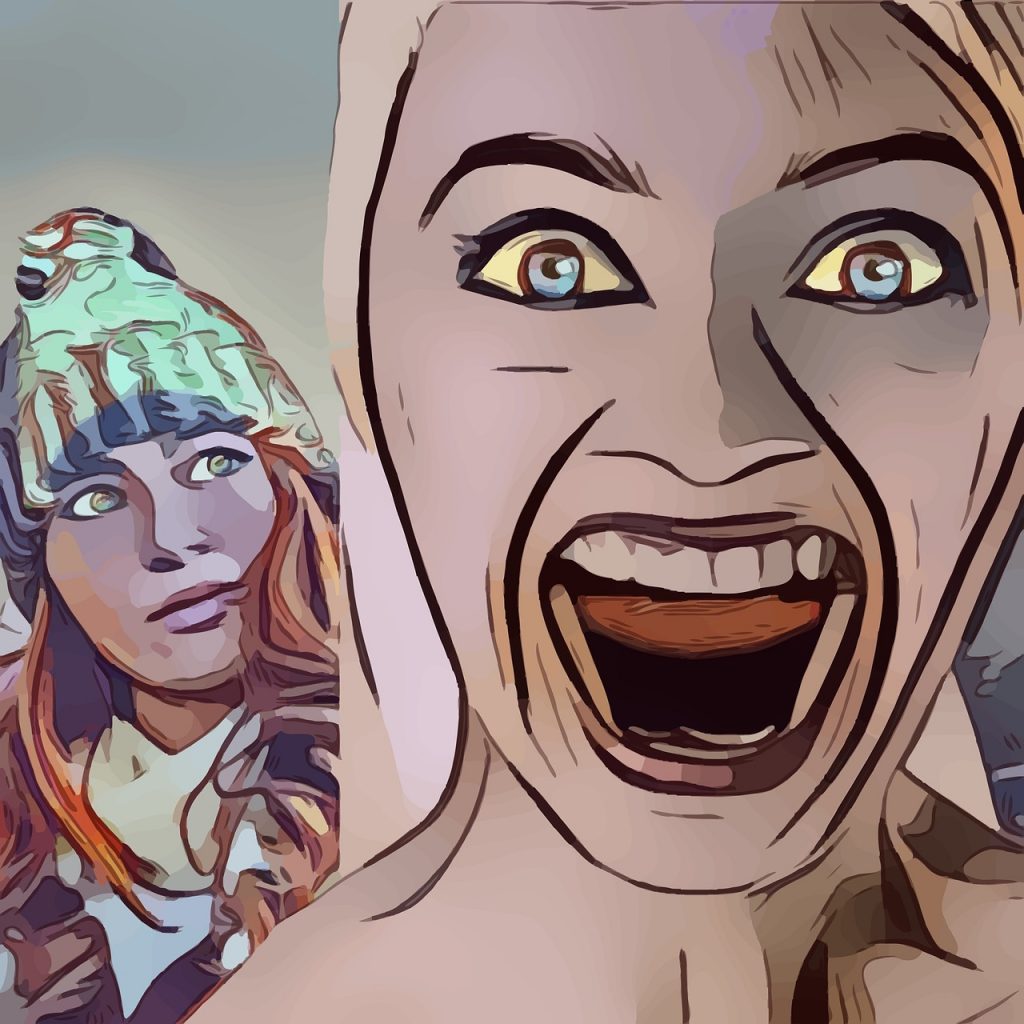 Answer: The first word of each sentence spells out “Tonight I will escape. See you Soon.” The mom ran to lock the front door, but the brother was already inside.

I woke up to banging and clattering this morning. My wife was downstairs making breakfast, but she doesn’t usually make so much noise.

I went down to the kitchen and said “Good morning.”
She was cutting something up in the sink, had her back to me and she completely ignored me.

That’s when I remembered what happened last night. My wife caught me cheating on her and we had a violent argument. Today she must be giving me the silent treatment. How long can that last?

I sat at the table and asked when breakfast would be ready, but she continued to ignore me. I looked at the clock. It was almost time to go to work anyway. I went upstairs and hurriedly changed into my suit. When I came back down, my wife was out digging in the garden.

The trash was full so I grabbed the plastic bag in the kitchen. It was unusually heavy. She had even double-bagged it with black garbage bags.

I dragged it out to the end of the driveway and left it on curb.
It was so heavy, I wondered what was in there. My curiosity got the better of me. I finally untied the knot and took a look inside. What was inside? 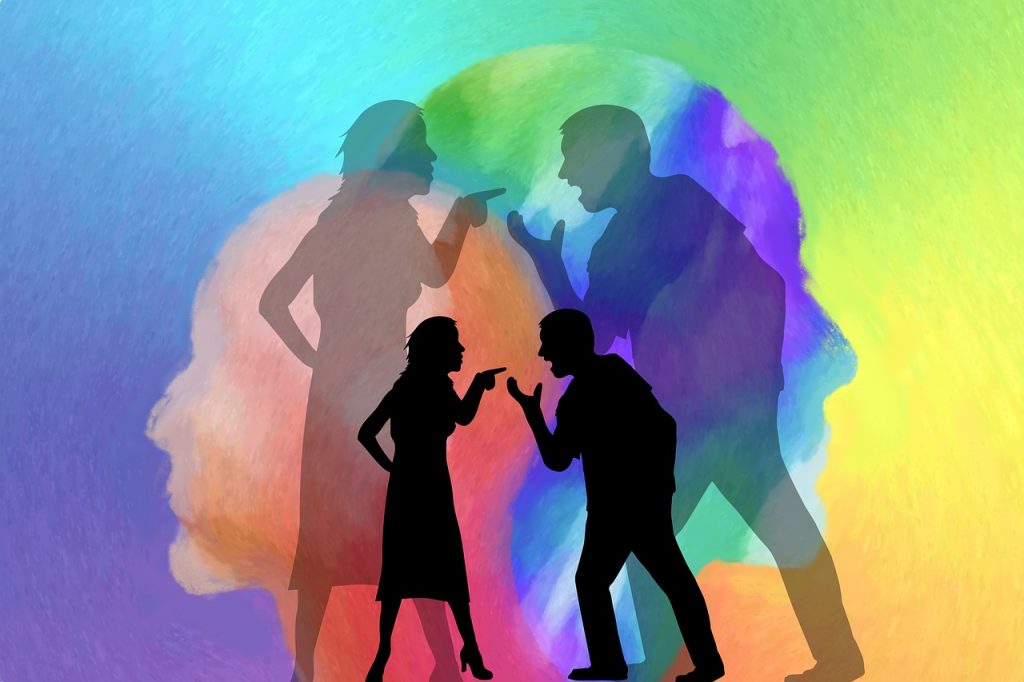 Answer: Body parts. The wife killed him, he is a ghost so she can’t hear him. She was cutting up his body in the kitchen and she put pieces of him in the bags while he was upstairs. Part of his body is being buried in the garden and parts of him are getting thrown out in the trash.

Did you like these scary Halloween riddles? If scary is your speed be sure to check out these Strange Phobias.

Let’s finish off our Halloween riddles with a less scary batch. The Keeping’ It Spooky Riddles are Halloween symbols or other things associated with the holiday season.

These three scary riddles are famous horror movie villains. See if you can figure out which movie killers these riddles are about. 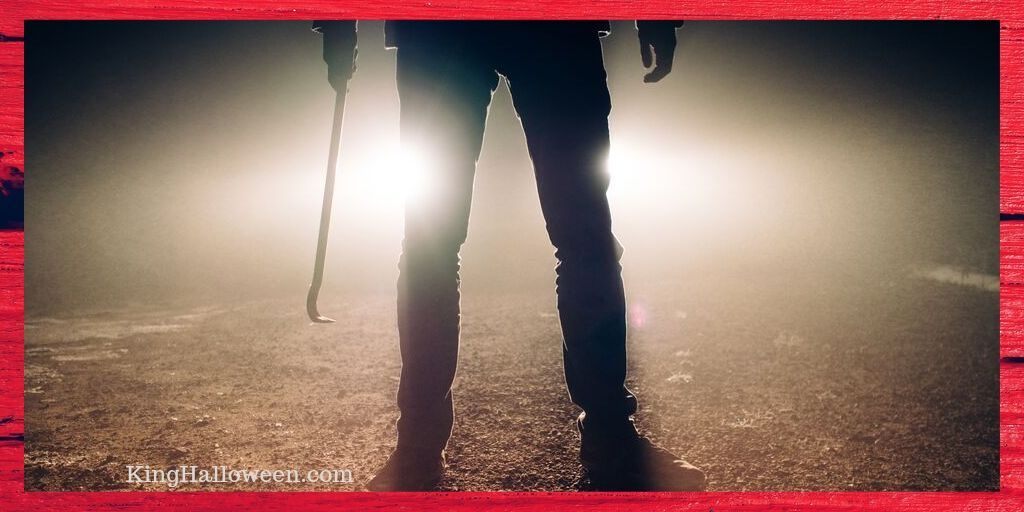 If you liked these riddles be sure to check out our Top 50 Horror Villains here.