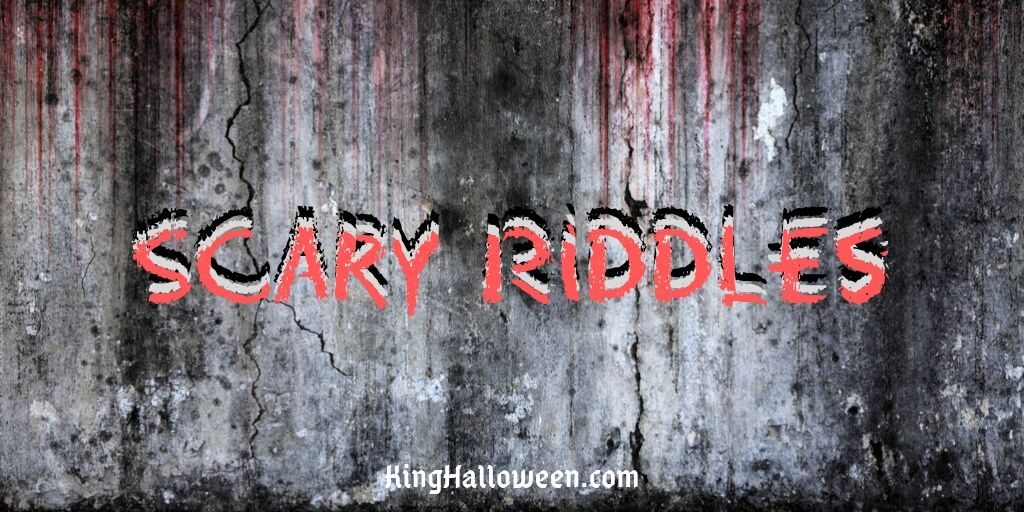 Our scary riddles will creep you out and get your wheels turning this Halloween. If these spooky riddles are too hard, check out our joke pages for simple scary jokes in a basic question and answer form. Get started on this page by warming up with our short spooky riddles. This should get you in the mindset for tricky twisty creepy riddles. Continue on by finishing up and solving our murder mystery riddles on our second scary riddle page.

These spooky riddles are the classic “what am I” type. Read each riddle and think what is it talking about. Then scroll right down to the answers. I suggest reading all the scary riddles before checking the answers, or you might get spoilers. If you enjoy figuring out what each of these scary riddles represents, take a looks at 7 Halloween Colors and What They Represent. 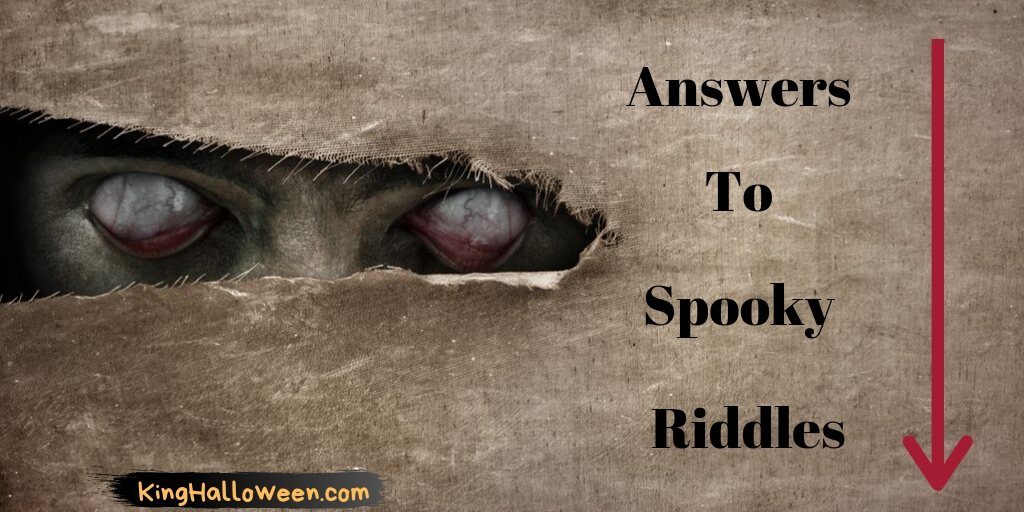 A man and a woman were driving in their car when it broke down.

Their phones were out of batteries. The man decided to go for help at a gas station, but it was a few miles back so he was going alone.

He made sure nobody was in the car, rolled up all the windows, and locked all of the vehicle’s doors.

He left and jogged to the gas station.

When he came back, his wife was dead and there was a stranger in the car.

No physical damage was done to the car.
How did the stranger get in? 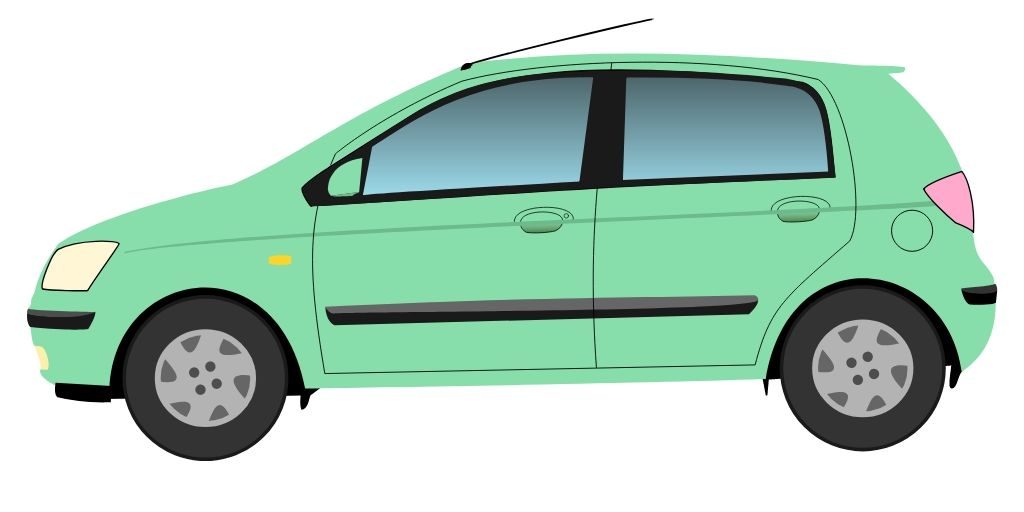 Answer: The stranger was a baby and the woman died in childbirth.

These scary riddles stare murder right in the face. You will read a spooky scenario and then figure out what happened? The answers aren’t always straightforward, but hey that’s why they are riddles and not just fun little stories. If these murder riddles don’t scare you off, take a look at at our Horror Movie Quotes for spooky sayings.

Omg, I was taking a shower and I heard a scream from the living room! I ran out of the shower naked to see what happened.

There was a burglar standing over the dead bodies of my mom, my dad, and my little sister. When the burglar saw me run in, he jumped out the window and ran off.

I’m so scared and don’t know what to do now!

Who is the murderer? Why? 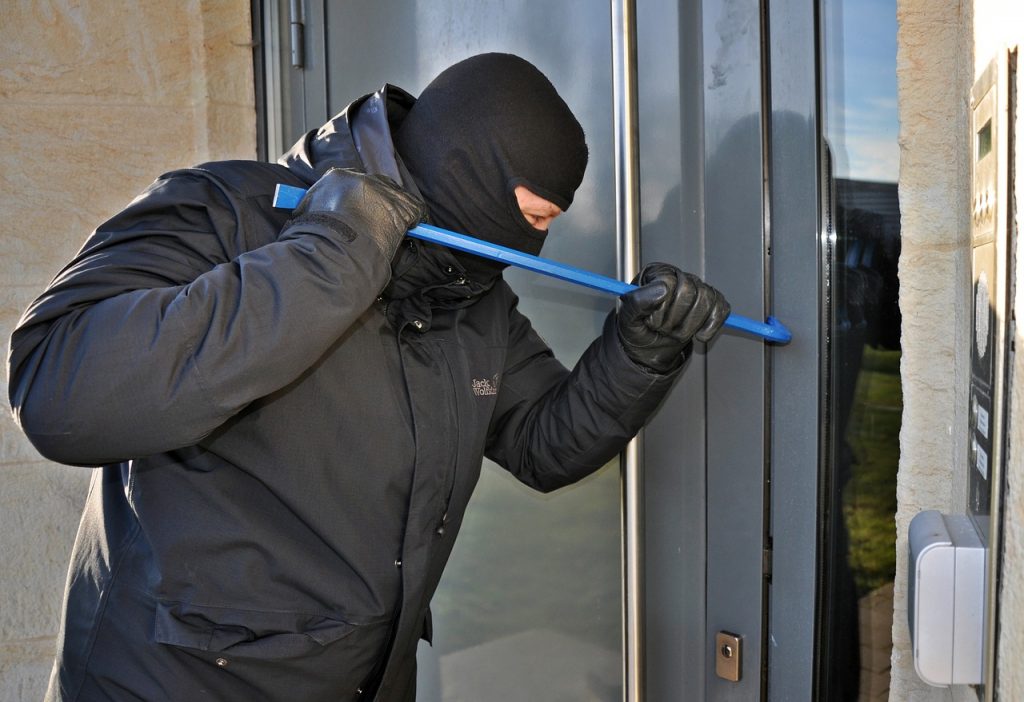 Answer: The guy showering is the murderer. Why:

When I was playing Tag as a child, I got so mad at my sister that I hit her with a stick so hard I accidentally killed her.

I was only 6 years old. I dragged her body to a nearby well and managed to push her in. The next day, I went back to the well and looked down.

Her body was gone! It was like it never happened, I was so relieved.

I lost my temper again when I was ten years old and hit my best friend over the head with a stone.

I dragged him to the well and threw his body in, hoping it would all go away again. The next day I came back and he was gone.

It worked again and I didn’t get in trouble. Everyone was upset that he was gone, but I felt great.

When I was 16, my girlfriend got pregnant and I didn’t need that kind of hassle.

She wouldn’t leave me alone and that’s when I remembered the well. I killed her and threw her down the well. I came back the next day and her body was gone. Problem solved.

I tried not to take advantage of the well, but the truth is I had many people that got in my way. Bosses, girlfriends, once even a valet attendant who stole from me.

They all ended up in the well and they would all disappear.

Eventually, I had to move back in with my mom and we argued one night. I lost my temper again and killed her. It was unfortunate, but I took her to the well and threw her in too.

I went back the next day and her body was still there! I kept going back and it never disappeared. Do you know why? 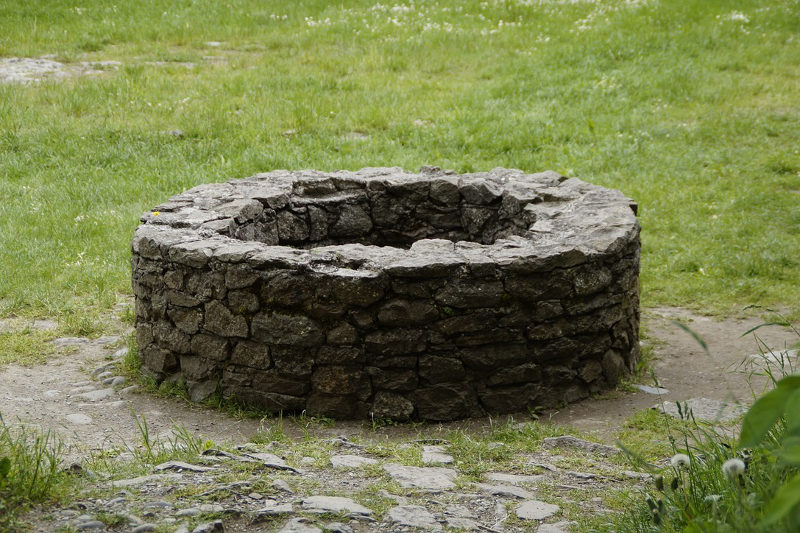 Answer: His mom had been cleaning up the bodies since he was 6 years old. She covered up for his crime. When he killed the mother, there was nobody to take her body away.

Neighbors may consider me a nosy old woman, but today I witnessed a murder.

It happened in the apartment building opposite me. I saw out my window and into a bedroom where a man was strangling a woman!

He finished choking her, turned towards the window and our eyes met. It was so creepy, but I didn’t look away. I wanted to remember everything about him to report to the police.

He stared and then pointed at me. It seemed like he stood like that forever, all the while his finger was trembling up and down. I called the police and reported everything.

They don’t have any available units and say it’s not a priority because I’m not in any immediate danger. They will send an officer to the building across the street soon and investigate the apartment.

Police said I can also expect a call tomorrow from a detective if they find the body. I’m going to go write down everything I can remember about the man while it’s fresh in my mind so they can catch this maniac.

Will the police use her description to catch the killer? 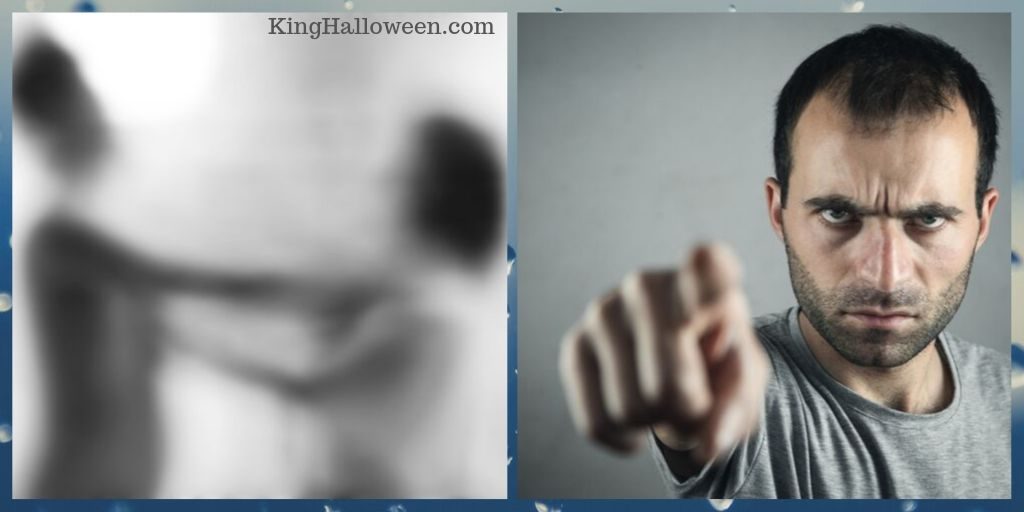 Answer: No, the killer’s finger was bouncing up and down because he was counting the windows. He knows what floor she lives on and what window is hers. He is going to kill her next.

A man plans the perfect crime to murder his wife. He stabs her to death with a knife in their car with no witness or cameras around to see it.

Without leaving any fingerprints on her body, he tosses his dead wife out of the car. Next he throws the knife off a cliff and into a gorge where it will never be found.

Lastly, the man goes home. Less than an hour later police call him and say that his wife has been murdered and tell him to come to the scene of the crime quickly.

As soon as the man arrives, police arrest him.
How do they know the man is a killer? 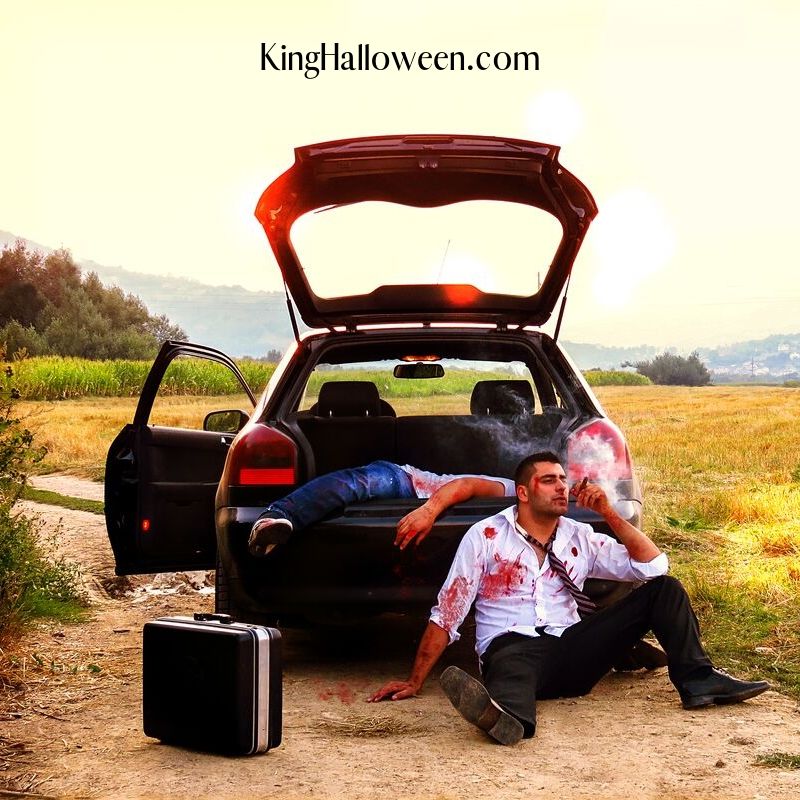 Answer: The man never asked police where the crime was committed. When he showed up, they knew he did it.

There was once a girl who was always jealous of her sister.

One day a genie appeared and told her that she was “half magic” which meant that he could grant her wishes. The genie said that her sister was pure-blood magic so for every wish, her sister would always get two times more than she did.

The girl didn’t care, she was just excited to have three wishes.

Her second wish was that she would be most beautiful woman that’s ever lived. She was breathtaking, but once again her sister got twice as much beauty. She would still be in her sister’s shadow. 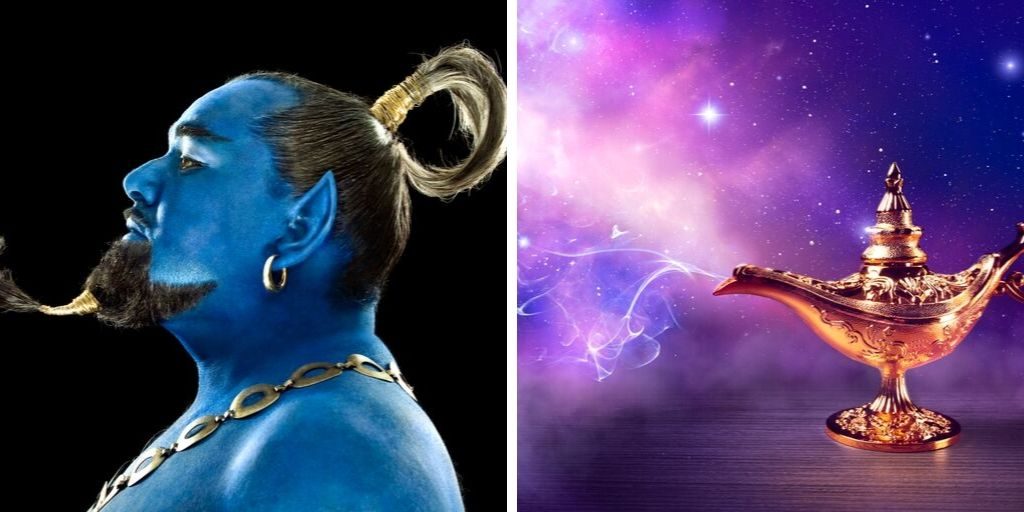 Answer: She wished for the genie to grab a nearby stick and beat her half to death. (Her sister will get twice as much and get beaten to death.)

Scary Riddles With A Twist

These are short but scary riddles with a bit of a twist. Take your time and with some ingenuity, you can get the right answers. 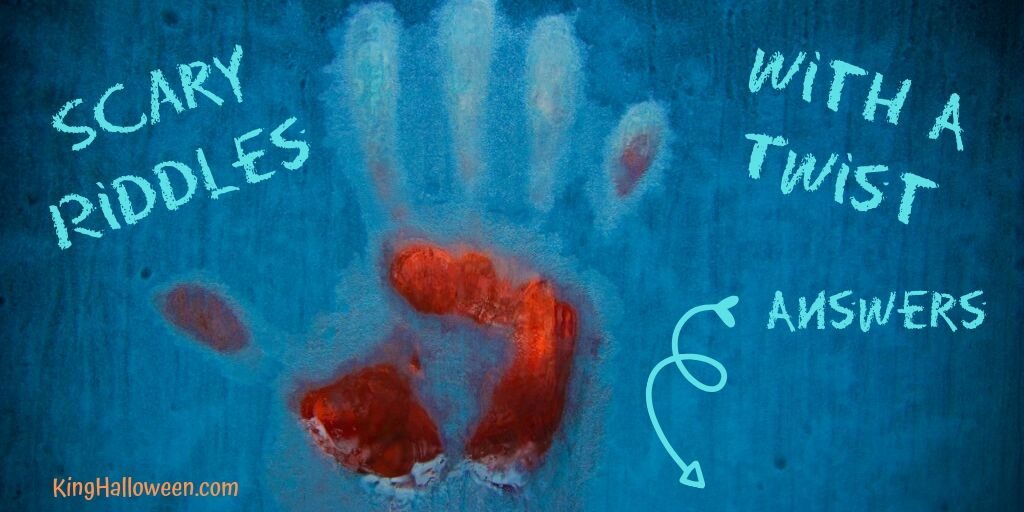